Aviation museum is cleared for takeoff

The College Park Aviation Museum recently held what it hopes to be its first of many tarmac tours. On Saturday, May 15, the museum welcomed guests aged 18 and older to explore the historic College Park Airport, the oldest continuously operated airport in the world. Museum staff introduced visitors to the airport’s history, including the many firsts in aviation that took place there. Several planes took off over the course of the morning, as well. 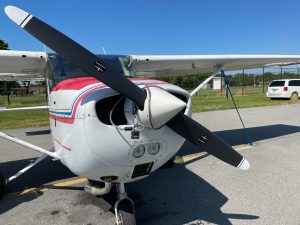 Clad in reflective safety vests, participants took a one-mile walk up and down the tarmac with Kevin Cabrera, the museum’s director, and Public Programs Manager Jamie Jones. The tour was Cabrera’s idea; due to COVID-19 restrictions, events that typically were held indoors at the museum had been streamed online for months; the tarmac tour allowed for an in-person experience, outdoors, with safe social distancing. The museum hadn’t offered this kind of tour before, so the event was a new frontier for the museum. As the group walked, Cabrera educated and entertained participants with stories about the airstrip.

“History has been made in this airfield, as have many firsts in aviation,” Cabrera said of the airport, which is adjacent to the museum.

The Wright brothers demonstrated their famous military flyer at the College Park Airport in 1909. They nearly sold their new aircraft to France, but instead sold them to the U.S. Army Signal Corps, establishing the U.S. as the first country to own military planes. The Wrights did not generally make their flight attempts public, though they demonstrated their military flyer for the full U.S. Senate. They also wanted a relatively private location where they could teach the military how to use the flyer. College Park was chosen because of its relative solitude, at the time, as well as for its flat topography.

Though the U.S. later moved military flight operations to Texas and then San Diego, the airport remained fully operational and has been a popular spot for hobbyist pilots ever since. Some government-owned aircraft are stationed at the airport, as is the Prince George’s County police helicopter.

While many of the landmarks of the original airport have been removed over the years, some still remain. The original hangars are long gone, with evidence suggesting that they were destroyed in a fire, but the footprints of where they once stood are still present, and Cabrera noted them on the tour. Also remaining is a large compass rose; it indicates the direction of magnetic north, in 1918 (magnetic north has changed since then). Even as some old markers remain, the airport has grown significantly in its more than 100 years of operation, and now features paved runways and a beacon that collects weather information.

For a small facility, the College Park Airport has played a large role in aviation history. It was home to the first regular airmail service flown by the postal service. It is now home to the 1941 Stearman N8NP that Gus McLeod flew in the first open cockpit flight over the North Pole, in April 2000. McLeod donated his plane to the museum shortly after that famous fight.

And the airport is continuing to make history, even today. In October 2021, the airport plans to host an event to honor the first Latina pilots in aviation history, who are flying in from as far as Germany to teach and take part in a day of special programming.

Cabrera hopes to do more tarmac tours in the future, including tours for younger guests.

“What I love about this tour is that it gets you a firsthand experience of the airport and the history that occurred there,” he said at the end of the inaugural tour. “[It] combines the modern with the old, because you get to experience modern planes and the history of aviation from the past.”

The museum is open to visitors from 10 a.m. to 4 p.m. every day except Monday.