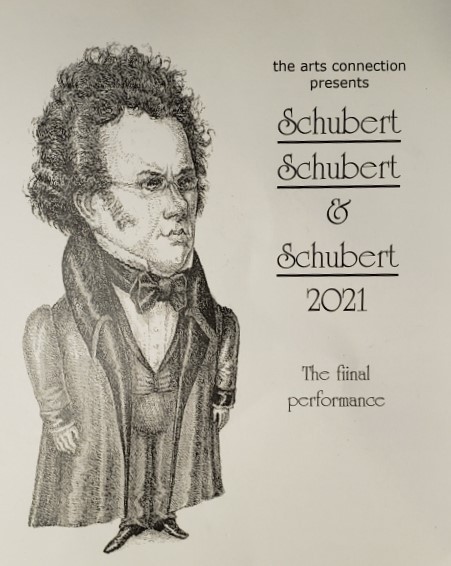 The cover of the program for the Oct. 6, 2021 concert of the Auryn Quartet. Caricature of Franz Schubert by Steve Mendelson.
Hyattsville

On the temperate evening of Oct. 6, 2021, pairs of Hyattsville residents stood quietly six feet apart, in a loose line that unraveled down the steps of the First Baptist Church on 42nd Ave.

A brightly lit sign flashed next to us as we waited, saying, in an alternating paradox, “All are welcome,” and “playground closed.”

A wide shaft of light came through the open door of the church. The sound of violins warming up came out too, faint as the fall crickets.

The brightness of the light shocked us when we came into the wide white church sanctuary. Caution tape separated every other pew.

Masked, distanced, and dutifully cautious, we found our places seated on the long red cushions of the dark open pews.

We were there to see one last concert of the Auryn Quartet, which has played in Hyattsville every few years since the late 1980s.

The string quartet, formed in 1981, took the name Auryn from the magical protective amulet in the 1979 German novel The Neverending Story.  In the novel, the Auryn is a circular piece of jewelry made of two snakes who form an endless knot, swallowing each other’s tails.

The original members of the quartet have stayed together for forty years. They are Andreas Arndt (cellist), Stewart Eaton (viola), Matthias Lingenfelder and Jens Oppermann, both violin.  They are retiring in 2021.

After an introduction from their long-time local patroness and friend, Gloria Felix-Thompson, the four musicians filed in amid applause, looking pleased, if a little battered. Their black suits were dusty in the bright light; the black buttons on their black shirts shone.

They sat down, no further apart than a string quartet of the before-times, and began to play together, unmasked.

On the program that night were string quartets Nos. 14 and 15, written by Franz Schubert, a famous songwriter in his time.  He was Austrian, like Felix-Thompson.  He died in 1828, at the age of 31, and was in the midst of a long illness when these quartets were composed.

It was a shock to hear music live, the tremolo (a technique involving shaking the bow along the string) real as the buzz of the crickets we had just heard outside, and much louder. The theme passed effortlessly between these men who had been making music together for nine years longer than Schubert had lived.

As they finished the movement on a slippery lulling decrescendo we sat silent, and noticed they’d been playing over the ambient noise of an air-conditioning fan presumably running to keep us safe from each other.

The second movement, an andante, began with a singing cello; Arndt, the handsome white-haired cellist, had a flesh-colored eye patch over his left eye, and peered over thick reading glasses to catch the eye of the first violinist, Lingenfelder.

Pizzicato (plucked strings) clipped through the piece like the footsteps of a horse through the brooding, adventurous music. Near the end the music sped up into a train ride through open country, with violist Eaton chucking in time and Oppermann joining Arndt and Lingenfelder in crying out at the beauty of the landscape flying by.

I won’t tire you out by trying to put the last two movements of the quartet into words.

I will tell you that when we got to intermission, my husband ran home to roust our 10-year-old cellist out of bed and bring her back to hear Schubert’s most famous string quartet, no. 14 in D Minor, known as Death and the Maiden.

That piece began somber and familiar, with rhythmic unison and tonal complexity. The players seemed to muse together on faith and doubt. The second movement was singer-songwriter sad, almost jazzy in places, with the violin weeping through gypsy high notes and the cello answering in pizzicato; it ended in a death march.

A short, shouting third movement, and then on to the final presto: the last movement was incredibly catchy, a cross between a pop song and a call to arms.

My maiden (our 10-year-old) had sat forward for the first movement and sunk back in my arms for the second; she was now bopping in her seat.

As we neared the end, the first violinist slowed down into a keeningly poignant, uncertain repetition of the theme, and the other three instruments rallied round, like three reflective and thoughtful listeners, reminding me of my maiden’s wonderful uncles.

There was a standing ovation, of course. A white rose for each player.

And we sighed with happiness as they retook their seats for an encore. “Schubert & Schubert is not enough,” said Lingenfelder: “we play another Schubert, Quartettsatz in C minor.”

“For Gloria,” said Arnst, with a big smile.

We listened, and then we left, exultant; what a wonderful gift to hear music like that, blocks from your home, for $10 tickets, in the second October of a global pandemic.

That particular quartet won’t be coming back, and who knows if the attenuated concert series at the First Baptist Church will ever resume.

And yet, our maiden has been practicing a lot ever since.

5-year-old is running leukemia into the ground

‘Greater College Park’ has benefits for Hyattsville, too