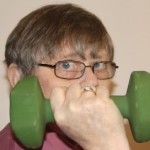 My husband and I believe that an elderly neighbor is being abused by his nephew. What do we do?

Call the local police if you believe he is in immediate physical danger. Otherwise, call the Prince George’s County Adult Protective Services at 301.909.2228 to report your concern.

According to the office of State’s Attorney Angela S. Alsobrooks, most elder abuse goes undetected. Principal Deputy Tara Harrison told an elder-abuse forum in June that it “is a major concern” for Alsobrooks, whose office has a unit dedicated to combating it.

“Seniors deserve the fullest protection that our laws can provide,” said Harrison.

This mistreatment can take many forms: violence, neglect, abandonment, and sexual and emotional abuse. It is usually, but not always, perpetrated by someone close to the elderly person, such as a spouse, adult son or daughter or caregiver.

Financial exploitation, too, is a big threat to the elderly. More, in fact, than physical assault.

“As people grow older, their chances of being victims of crime decrease dramatically,” according to the National Crime Prevention Council. “But a lifetime of experience coupled with the physical problems associated with aging often make older Americans fearful. Though they’re on the lookout constantly for physical attack and burglary, they are not as alert to frauds and con games – in reality the greatest crime threat to seniors’ well-being and trust.”

Experts say that those most at risk are women and the very old. Dementia is a significant risk factor and isolation can also contribute to risk.

Elder abuse can also occur in nursing homes and other care facilities. To report suspected abuse in one of these, contact the county’s Long-Term Care/Ombudsman hotline at 301.265.8483.

Auntie Diluviana is an occasional column that shares the insights of members of Hyattsville Aging in Place, an organization dedicated to helping seniors stay in their homes and remain active in the community. It is edited by Molly Parrish.

My Two Cents: Does your baby smoke?