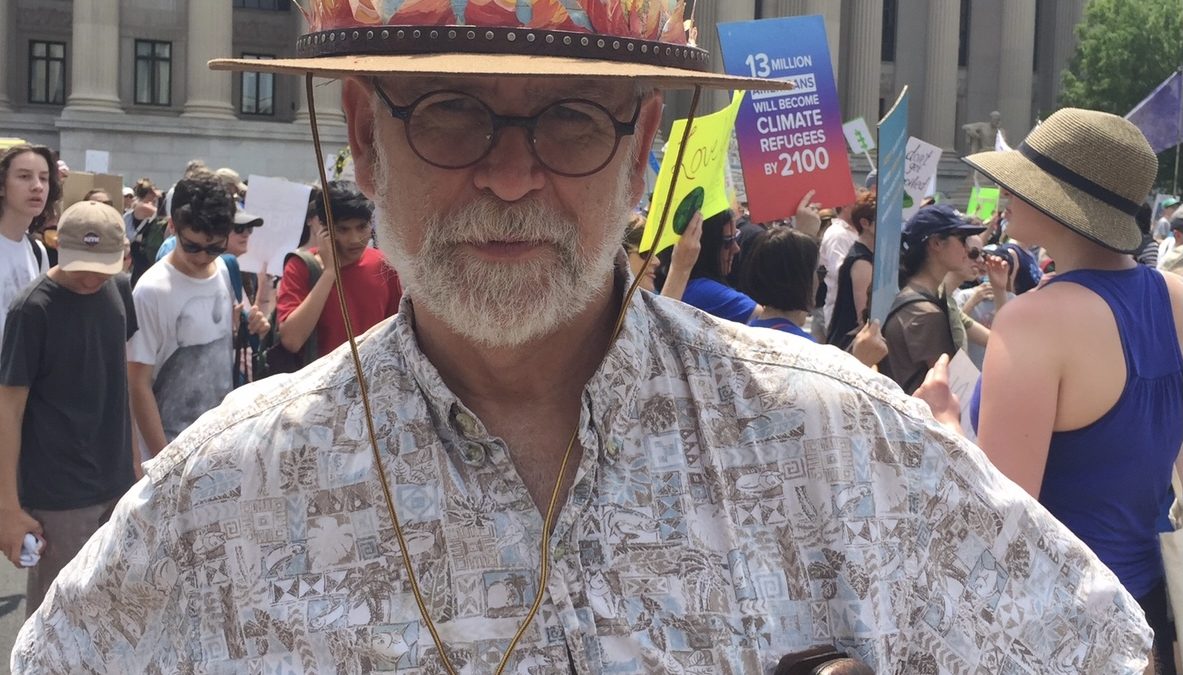 I have often driven past the Vanadu Art House — that elaborately ornamented art house on Nicholson Street — and, occasionally, I have spotted a similarly embellished car cruising along my street. Recently, I had a conversation with the man who created both: Clarke Bedford, a pensive and affable man, a beloved neighbor, a retiree, a proud father of two adult children — and a notable artist.

“I’ve been living on one side or the other of East-West Highway since 1987. First, I lived in University Park,” said Clarke. In 2000, when he and his then-wife separated, Clarke moved to Nicholson Street, into a plain bungalow that was built in 1918. “It’s hard to imagine that it was a family home in its day, with its tiny rooms and even smaller kitchen,” he said. According to Clarke, the original owner, whom he termed a first-generation developer in Hyattsville, built four identical homes. The developer lived in one of them and sold the other three.

“When I began to work on my house, in 2002, Hyattsville seemed so informal — almost rural,” Clarke pointed out. “I already had two art cars, and no one cared much about how my house or cars looked. Most of my nearby neighbors still don’t care,” he added. “Now, I have five art cars,” he continued. “All work, are plated, insured and legally parked. When driving, it can be hard to pull into traffic because people slow down and stare, but as a friend said, ‘You can’t put on a show like that and say to people, what are you looking at?’”

“Having both an eccentric and acceptable profile is a balancing act,” Clarke admitted. “I did not expect the attention. I put this together for myself just because I wanted to, as expression or therapy, a change from work, whatever,” he said. “People visit from all over. … Some people see my home as fun — some, weird. It breaks a few taboos about suburban neighborhoods, which probably works here [in Hyattsville]. While doing an interview for Roadside America magazine, I was told some readers said that they were afraid to come right up [to the house], in case I was nuts. I think that’s revealing,” he said. “It’s different, and some people have an extreme intolerance. … Other people might see the influences of modernism. It’s assemblage art, a century-old form,” he continued. “If you look around my yard, you can probably see things placed in a very deliberate way: the choices made, and the juxtapositions that come from being around 20th-century art.”

Clarke earned a Masters of Arts in art conservation, and he worked for 33 years as a conservator at the Hirshhorn Museum, retiring in 2013. He explained, “Conservator is a newer word for restorer. Restoration is a part of conservation, which is the larger task of taking care of art. So I fixed art, documented it, and traveled with it. I made sure nothing happened to it. Being a conservator is an art unto itself. I took lots of science classes, and I have art skills,” he added. Clarke took care of the work of nearly all of the big-name modernists: de Kooning, Rothko and Picasso, among others.

“Now I consider myself to be an independent street artist,” Clarke noted. “I think it would be great if more artists could just do what they wanted in a public way without organizations, which tend to homogenize things,” he opined. “Gateway [Arts District] is real. Lots of creative people are here, and institutions have been established. However, the [Hyattsville] Arts District seems to be about organizational promotion, grants or maybe a tax thing. … A friend of mine said the [Hyattsville] Arts District is mostly a place where you can get a hamburger for $12, which I thought was kind of funny.”

At the close of the conversation, Clarke noted that he is 74 years old and said that he has a form of leukemia. “This [life] will come to an end,” he said.  “When your friends start dying, you think about death. It’s an interesting point of destination.” And then he reflected on his work: “It’s frustrating to think about what’s going to happen. I think of my children, who are busy doing their own thing. I don’t want to dump it [the art house and cars] on my kids. … I created it, so I will have to deal with it.”

Vanadu Art House is well-recognized in the media and in travel guides. “Every reference has Hyattsville attached to it,” Clarke noted. “Would the city want to keep it? Will a person or group want it? … Perhaps a 30-year-old version of myself, with a government job, could move in here. Someone with a blend of responsibility and kookiness. They would have to know how to play ball and pay taxes,” he said, “and make it their own.”

Hyattsville Life and Times, 8 years ago 1 min read
From the Editor

From the Editor: When the press becomes the news