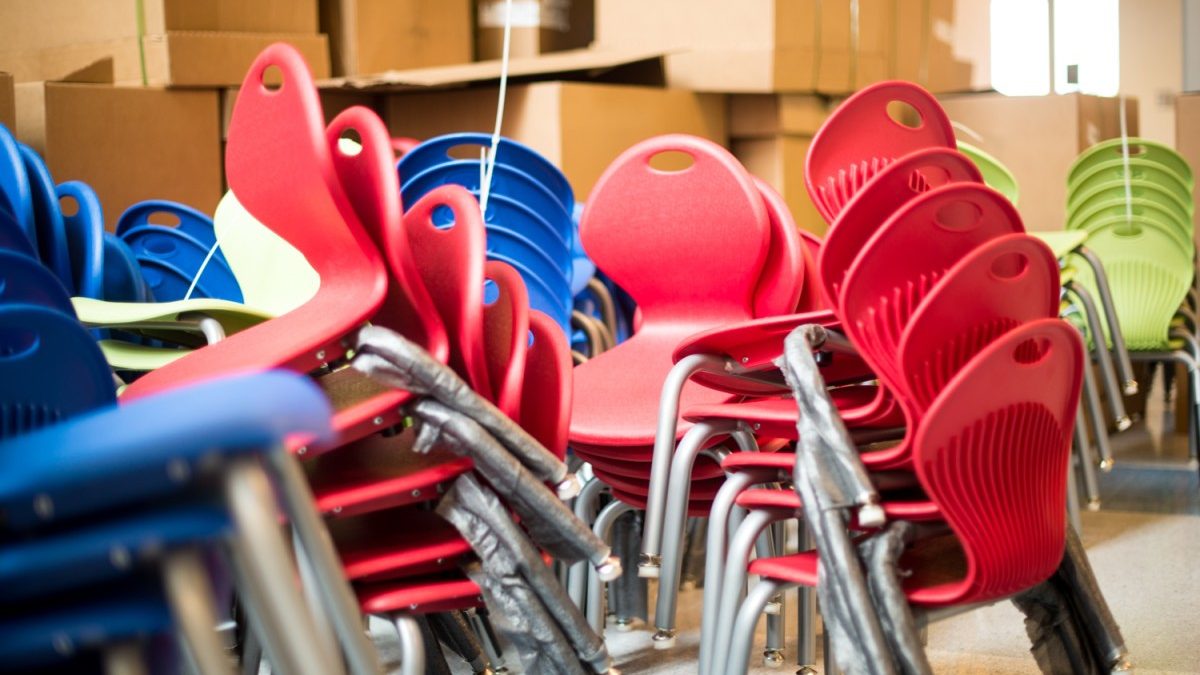 West Hyattsville’s new elementary school, Edward M. Felegy, opened on August 25 with new principal Walter Reap at the helm. Previously, Reap worked in Anne Arundel County, where he spent nine years at Germantown Elementary in Annapolis. Felegy will be the second new elementary school building whose launch Reap has overseen, as Germantown moved during his tenure.

“It’s incredible. This is my second new school and this building makes my old [one] look like a factory,” Reap said. “This is how a new school is supposed to be.”

Even from the outside, it’s clear that Felegy is meant to have an artistic feel. The building’s exterior has what Reap calls a “West Coast vibe,” with clean lines and sweeping roofs. The design is meant to communicate the school’s creative and performing arts focus. Felegy gives children a chance to explore dance, music, and the visual arts, with extra time set aside for these activities.

On opening day, Reap was put in charge of  650 new students from four Prince George’s County schools. Those students have all been thrust together in a new setting, and building a strong student community is a high priority for the new principal.

“We’re talking about students that have an attachment to their [previous] schools,” Reap said. “That attachment is more than just the building – it’s friends, it’s parents. The students will eventually be excited, but we’ll be dealing with a whole range of emotions.”

Still, the building’s layout helps. With smaller wings of the school for each grade, three playgrounds, and plenty of places for students to work together and mingle during free time, Felegy is custom-built to foster a community of learners. The main hall is dominated by two murals that reflect that communal ideal; one highlighting the history of Hyattsville, the other showing the architects’ inspirations for the school’s design.

Classrooms are also equipped with SMART boards, which connect to computers and allow teachers to bring technology directly into their lessons. While it’s a step into the future of education, Reap is quick to point out that technology can’t replace fundamentals like a solid curriculum.

He supports the theory that a student’s environment can have a huge impact on the ability to learn.  Exposed pipes run along the ceiling and large expanses of glass reveal the bones of the building. It’s a design that Reap hopes will pique the students’ interest and help them develop an inquisitive mindset while at school.

At Germantown, he helped drive test scores and individual results up, in part, by maintaining a clean and crisp learning environment and by introducing school uniforms.

“When you have on your work clothes, it’s time to work,” Reap explained at TEDxAshburn, a  gathering designed to help leaders share ideas.

But it’s not just up to the students and teachers. Jennifer Kubit and Diveena Seecharan, both of whom have children at Felegy, emphasized the value of building parent involvement through a PTA.

Kubit, a former Prince George’s County teacher, said that the first year is really about  building a group of involved parents. “Getting members and volunteers on a regular basis,” Kubit said, “is the most essential [first step].”

A PTA “could help support programs that get the community to participate,” Seecharan said.

Reap also wants to define what an arts focused elementary school can be, to increase the respect that a community school can command, and to find new ways to take advantage of the school’s impressive facilities.

Those goals will take years to accomplish, but Reap says he is in it for the long haul. He and his wife and looking for a new home, and after spending time in Hyattsville, he said that he found it a welcoming place. Now he just needs to earn a bigger role for Felegy in that community.

Getting to know Hayden Renaghan