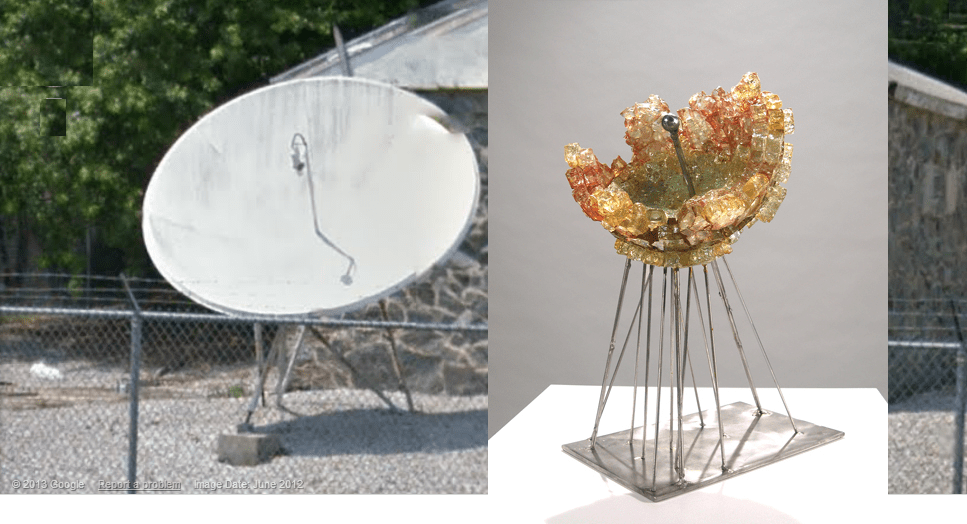 BY AMANDA EISENBERG AND SUSIE CURRIE — What do you do when the most prominent feature about your new property is a giant, nonfunctional satellite dish? If you’re part of the Hyattsville Community Development Corporation (CDC), and the property will be your new headquarters, you plan to turn it into public art.

Though funds are still being raised for the project, CDC Executive Director Stuart Eisenberg has secured the services of local sculptor Alan Binstock to repurpose the hulking gray dish in front of 4314 Farragut Street. The two-story stone bungalow once housed the first cable television franchise in Prince George’s County, according to the CDC website. When renovations are complete, the nonprofit hopes to share space with the Creative Edge Studio Collaborative and two artists-in-residence.

Binstock and Eisenberg have a longstanding professional relationship; the two have partnered on such projects as the 17-foot-tall “Pilgrim’s Quandary.” The steel-and-glass sculpture was unveiled in 2009 in the pedestrian plaza of Post Park, at 3300 East-West Highway.

It’s one of many large-scale public artworks scattered throughout the city. Along with several bird statues from the 2002 county-sponsored installation “Birds-I-View,” there are mosaic-covered street benches and murals on commercial buildings.

Last year, the CDC-sponsored Street Art Initiative, a collaboration between artists and businesses, transformed 19 exterior walls into large-scale murals along Route 1. A similar progam, the Biz-Art Match-Up, is currently underway to match 10 to 12 local businesses with artists who will use “unconventional, low-cost means” to promote the product online or in-house.

Hyattsville is able to put up 20 public pieces at the same cost of one public artwork in Washington, D.C., said Eisenberg.

“The arts district is known for its “proliferation of public art along Route 1,” he added.

At press time, Eisenberg had $800 set aside for the satellite dish project, and plans to fundraise throughout the year to increase that budget.

“He’s showing us some love,” laughed Eisenberg, noting Binstock’s generosity towards the CDC.

Binstock acknowledged that “the design scope of the work [is still] being sorted out,” but added that because it will be a public work of art, he would like to include residents in the process, perhaps by breaking glass together.

Glass features prominently in the sculptor’s work — and lawn decor. His Mount Rainier home stands out from the cookie-cutter homes that line 31st Street. Glass sculptures glisten on his front lawn, even on a snowy day in February.

His spacious, 18-foot-tall studio smells of firewood. The heavy scent wafts around pictures of stars and da Vinci’s famous Vitruvian Man drawing. On the inside of the big metal farm doors, a large white board lists classic rock songs ranging from “Mustang Sally” to “Black Magic Woman”; he dabbles in the electric flute. A dirty iPod is plugged in and sits on one of the workstations, and the big speakers hung from the ceiling makes it appear that Binstock jams out as he works.

Not unlike a teacher, Binstock asks questions minutes after explaining the process of his art, just to make sure you understood the science behind his glassworks. His passion for both aspects is clear as you move around his studio.

“It’s a tremendous process. He does great things,” said Jesse Cohen, founder of the artdc gallery on Route 1.

When Binstock moved to Prince George’s County in 1988, Route 1 was “nothing like it is now,” he recalled. But he soon noticed that in Mount Rainier, “there were plenty of artists that were right there to rent [homes].”

So the West Bronx native was one of the first people to help create a niche area for artists in what would become the Gateway Arts District. He said that he worked with Marybeth Shea on a feasibility study in Mount Rainier for art space using a small grant from the Mount Rainier Business Association.

Meanwhile, he worked out of his home as an architect while spending his evenings and weekends in the studio. A graduate of Hunter College and the University of Maryland, Binstock received degrees in fine arts and architecture, respectively. There are few sculptors that have a background in architecture, he said, giving him an edge.

In addition, he draws heavily upon science as inspiration for his sculptures. Pointing to one, Binstock discusses his tendency to include a nucleus in many of his pieces. He wants the circular orbs to be “alive with light.” Another sculpture has DNA-inspired clusters of glass.

Science is part of his day job, too; when he isn’t sculpting, he works as a facilities architect for NASA Goddard Space Flight Center.

But making the gray satellite dish glow may be an uphill battle. Binstock says he’s toying around with the idea of adding lights to it.

“The challenge is to use materials to incorporate into outstanding mirrors to reflect light,” he said.

And when he’s done, it will be another bright spot on the Hyattsville horizon.

Cultural Connections: Longing for belonging – from India to the US