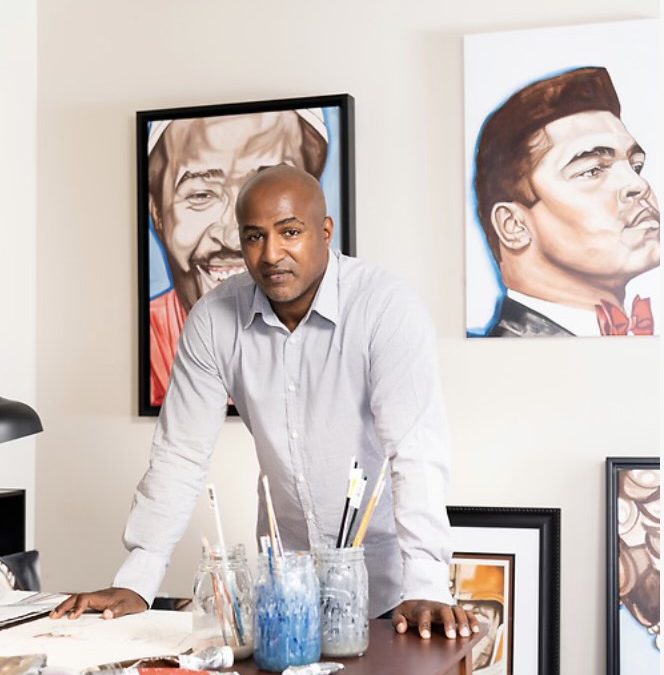 University of Maryland (UMD) alum Lynde Washington is painting his way back to his home turf, some 22 years after he graduated.

The former Baltimore Ravens player is painting a tribute piece to give to Jordan McNair’s family. McNair, was a 19-year-old UMD football player who died of heat stroke during an offseason football workout in 2018.

In addition to that piece, Washington will be creating six or seven paintings for the university’s football hall.

“[Locksley] said ‘it’s time to get you back involved … make an impression on the young guys,’” Washington said.

Washington said that he hopes to extend his artistic sensibility to the College Park community.

“College Park is very diverse,” Washington said. “You have kids from all over the country and artists who have come through there with all types of talent. … I just want to leave my mark.”

Washington said that meeting students of diverse backgrounds in his art classes at UMD inspired him to focus on his figure work.

“I’m not just painting a face; I’m getting into their feelings,” Washington said. “I want to capture my people … the characteristics that make them different.”

Washington said that his great grandfather, who was a commercial artist and jeweler, inspired him to become an artist, himself. He said that the weekends he spent watching him work built the foundation of his own artistic talents.

Washington takes the same focus he had on his great grandfather and places it on the athletes and historical figures he brings to life today.

One of them is Muhammad Ali, who is the focus of a series of paintings Washington will present at Red Dot Miami 2021, an art fair slated for next December.

Washington’s art journey kicked off when he was a student and football player at DeMatha Catholic High School, just two miles down the road from the university.

Vaughn Holsey, Washington’s high school art teacher, recognized his student’s talent from the start. “From the first mark a kid puts on paper, I can tell when they’re good,” Holsey said.

“Mr. Holsey was the second man who ever inspired me to continue to make art,” Washington said. “He let me develop my own style.”

Holsey said that Washington was serious, and that he dedicated and devoted himself to art, even with the demands of athletics.

“Lynde has a unique style. … It has this soft movement and lifelike feeling,” Holsey said.

In most of his work, Washington turns to his love for sports for inspiration, painting figures like Mike Tyson, Walter Payton and Jim Brown.

Holsey said that when he saw Washington’s signed Jim Brown painting, he knew that he had to have it.

He said that he is excited for Washington to be part of the DeMatha alumni art association he is forming.

“He is one of the top five students I’ve had who is still practicing and making a living off of their artwork,” Holsey said. “He’s recording history.”

Holsey thinks that it’s important that Washington is bringing his art back to College Park.

“Give honor to the places that got you where you are,” he said. “The athletes are going to see [Washington’s work] and say ‘He was a football player? I didn’t know we could do that.’ … They’ll appreciate seeing one of their own.”