"Biomorphic" is currently on view at Brentwood Arts Exchange.
Art 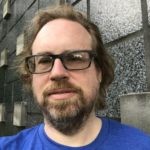 By PAUL HRUSA — The term “biomorphism” was coined to describe the work of Joan Miro, Barbara Hepworth, and Henry Moore, among others. It represents free-flowing imagery and forms that expand and contract, like amoeba and similar abstract shapes found in the natural world.

The exhibition at Brentwood Arts Exchange called Biomorphic is a show of craft-works designed as interior decorations. The paintings of Tom Hill and the mosaic forms of Liza Linder are displayed in an alternating arrangement as an attempt to transport the viewer but instead crowd each other on the wall with scant dialogue. Each artist’s works would be better served in their own display arrangement on opposing walls or alternating as groups of works.

The strongest piece in the show is “Ode to Cilia” by Liza Linder. Meticulously crafted of mosaic tile and glass and positioned as a sort of organic sprout coming out of the earth, “Ode to Cilia” explores sculpture through form, weight, and movement. Unfortunately, the piece is positioned tightly in a corner between a doorway and a painting as if it were a signpost. The organic line of the stem acts as a doorstop and the head of the cilia points to the rest of the show. “Ode to Cilia” is not allowed room to breathe.

In other parts of the exhibit, Linder successfully groups her sprouting forms into larger arrangements with floating forms. This modular approach provides a conceptual way forward toward a wide composition of forms that fully explore scale, depth, tension, and narrative.

Tom Hill’s paintings, heavily glazed acrylic and glitter on wood, are very colorful abstractions intent on capturing the sublime. Hill shows a grasp of application and technique and a color sensibility informed by stained glass. Each painting is composed as a window onto crowded, somewhat forgettable shapes floating toward a fixed center. But the shapes exhibit little movement, interaction, or transformation and there is limited variety in shape, scale, surface, and depth from painting to painting. Just as Linder grouped some of her pieces together in arrangements, it would be interesting to see Hill’s works grouped together as large scale stained-glass window arrangements.

ArtBurn is a new column reviewing local art. Paul Hrusa is a painter who lives and works in Hyattsville. His work has been exhibited in New York City, Washington DC, and Richmond, among other places. You can find more about him at his website.