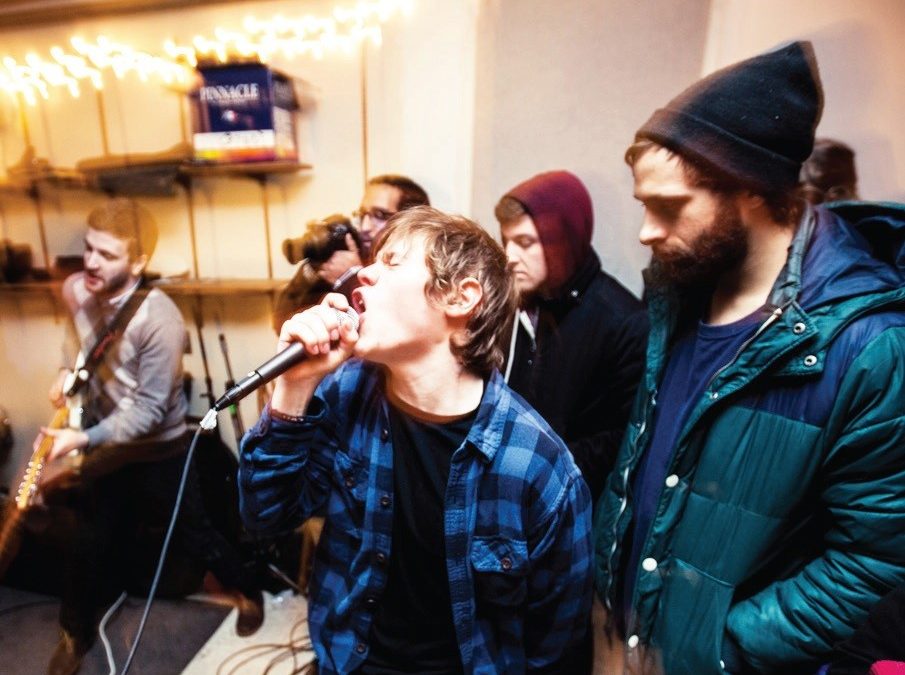 Less than a week after this January 30 concert in a University Hills garage, featuring Neck First and four
Crime

BY SUSIE CURRIE — Shortly after midnight on February 6, two armed men simultaneously kicked in two doors of a University Hills home that had regularly hosted underground indie-rock concerts and house parties. At press time, no arrests had been made, but the incident “does not appear to be random,” said Lt. Chris Purvis of the Hyattsville City Police Department (HCPD).

It happened in the 7500 block of Adelphi Road, across the street from College Park Academy and St. Mark’s Church, near the Campus Drive entrance to the University of Maryland. Four men in their early 20s were in the house at the time, said Purvis, including two who live there. They were ordered to lie on the floor and surrender their cell phones, wallets and laptops. The suspects are described as black men wearing ski masks and dark clothing.

No one was injured in the robbery, and police have not released further details about the ongoing investigation. Purvis said that five people live in the house, which is listed as the primary residence of the owners, Lin Yi-Hsiang and Perng Chuen-Shiang. State records show that they purchased it in 1987 and own two other homes in the area. A publicly listed phone number for them has been disconnected.

But the Adelphi Road house is listed as a rental property with the city of Hyattsville. And the HL&T has learned that after the new tenants moved in last fall, they began regularly hosting — and charging for — house shows with as many as five bands per night.

Since September, there have been at least eight events, including 22 bands. Invitations were public and sent through social media to hundreds of potential guests. A Facebook page for Hostage House, which lists the residential address, describes it as a “DIY music/arts space currently booking spring 2014.”

A typical evening would showcase four or five bands, both local and touring, and a flat admission fee of $3 to $7 per person. The music is described variously as indie, post-rock, pop punk and “twinkly math rock”; bands have names like The Joint Chiefs of Math, I Kill Giants and Neck First.

Signs on the two doors facing Adelphi Road directed paying customers to a lower-level side door.

“Every night I hear bands playing,” said Linda Thompkins, who lives on Rutgers Street across from that entrance. “They start practicing between 9 and 9:30 and are usually still going when I go to bed at 11 or 12. I thought it was a practice house for the University of Maryland band.”

At least two of the four people whose names are on the lease have performed with their bands at the house parties. The residents are all in their 20s, and at least one is a student at the University of Maryland. One is a recent graduate. None agreed to talk to the HL&T about the crime.

“Honestly, we’re all very shaken and would like this to be put to rest as soon as possible,” wrote one man, contacted through Facebook. “Everyone is OK, and we would really appreciate some privacy on this matter.”

It seems that the house is about to get a lot more private. Three shows had been scheduled for February and March, featuring more than a dozen bands and, in one case, an art exhibit. But on February 8, organizers announced that they were looking for other venues for those events.

“All future shows at our house are cancelled,” they posted on the Hostage House Facebook page. “[We are] so unbelievably heartbroken and sorry but this is entirely out of our hands. We no longer feel the house is a safe space and the authorities have asked us to cease all activity.”

That request was likely inevitable. Since the neighborhood is zoned for single-family houses, any business being operated from a residence there would require a license. Several, in fact, beginning with a Use and Occupancy Permit (U&O) from Prince George’s County. Businesses that want to host live music need a Special Entertainment Permit. Businesses that want to host live music with dancing need an additional permit from the county.

The City of Hyattsville, too, requires businesses within city limits to have a license.

“You can’t operate a business in Hyattsville without first getting a U&O from the county,” said Code and Parking Compliance Manager Chris Giunta. And, he added, “having a live band regularly performing in your home is an indication that you’re probably running a business.”

“I’m amazed that they’ve been able to fly under the radar for so long,” said Ward 3 Councilmember Tim Hunt, who lives two blocks away. “It sounds like they’re doing something fun. But this belongs in a warehouse somewhere, not in a residential neighborhood.”

An Adelphi Road neighbor who requested anonymity said that “when they have parties, cars are lined up and down the street, in front of my house and on the side streets.” He said that he can’t hear the music, but he has been woken up by departing guests “talking and slamming car doors.”

Guests were urged to bring their own drinks and park across Adelphi Road in the St. Mark’s lot, an arrangement that was news to the pastor there.

“I’m appalled that people would abuse the parking lot in this way,” said Rev. Roberto Cortés-Campos. “It’s a private property. If a group wants to use the parking lot, they would need to talk to us about it first and explain what they’d be using it for. This is not a use I would support.”

Organizers sought to minimize potential disturbances to the neighborhood. Most of the invitation pages prominently list rules for guests, such as: no littering, “be quiet and respectful while you’re outside[,] stay OFF the front/side lawns, OFF of Adelphi Road, and don’t hang out in the parking lot.”

Another Facebook posting states that they don’t want people at their New Year’s Eve party with fireworks or drugs, or those who might “disrespect or otherwise damage our house or stuff, make other people feel uncomfortable, [or] disturb our AMAZINGLY kind neighbors.”

They seem to have succeeded, to some extent. Though HCPD officers were called to the house twice before (a noise complaint in October, a car stolen during a November 3 Halloween party), Purvis confirmed that the police only learned about the residents’ entrepreneurial side in interviews after the recent crime.

The armed robbery was widely reported and caused reverberations in the community — especially after a security-system company went door-to-door in the neighborhood hours after it happened. Although police have not disclosed a motive for the crime, some nearby residents speculated that the widely publicized cash-only concerts may have suggested the target to the thieves.

Others took a broader view of the crime in light of what they saw as part of a trend.

“My perspective goes beyond just this single event,” said Ron Pedone, president of the University Hills Civic Association, he said. “In the last two years, there have been 56 crimes reported in University Hills alone — assaults, burglaries, break-ins. What’s going on here?”

Hunt was somewhat reassured to hear that the police think the house was not selected at random.

Still, he said, “Whether random or targeted, it’s certainly distressing. It affects all of us when armed robbers are breaking into houses when people are home.”

Then & Now: We are the Hyattsville Preservation Association