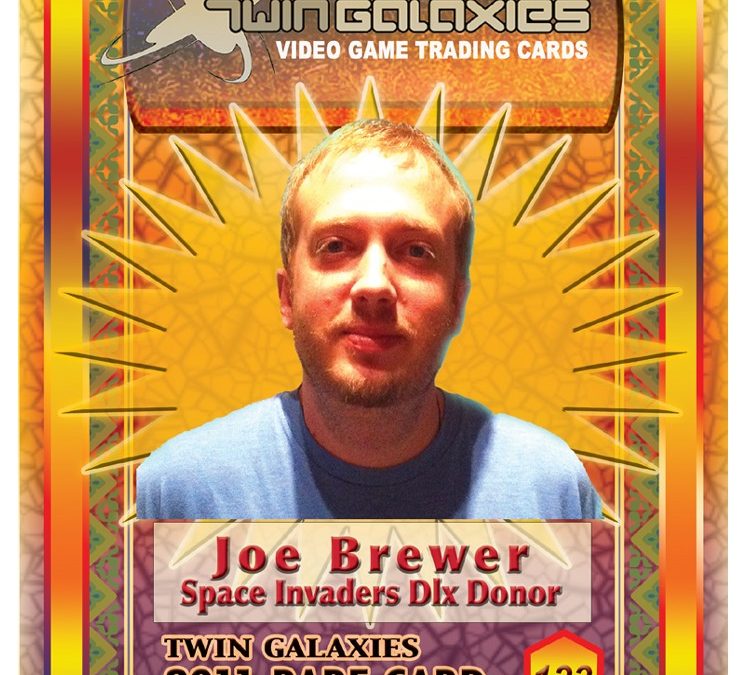 Joe Brewer may be the only Hyattsville employee to have his own trading card. Photo courtesy Walter Day.
Print Edition

Brewer, a code-compliance officer for the City of Hyattsville, has a fully functioning arcade in his basement that is sure to make 10-year-olds everywhere (and their dads) jealous. The collection that started in 2008 with a roach-infested Ms. Pac Man he found on the side of the road has grown to include 20 old-school video games and pinball machines, many restored to their original condition.

And now, Brewer’s hobby has landed him a spot on a trading card, part of the limited-edition Twin Galaxies Video Game Set. It’s named for the organization that has been tracking video-game world records since 1983.

On August 10, Brewer and others were honored during an awards ceremony at the Iowa Contemporary Art Museum (ICON) in Fairfield, Iowa, where the trading cards made up part of a Twin Galaxies exhibit. The cards, said Twin Galaxies founder Walter Day, showcase people who have made “important contributions to the worldwide video game industry as competitive gamers or industry celebrities.”

How did a Hyattsville business-licensing inspector manage to find his way onto a video game trading card?

“I was always a musician,” he said, “but I picked up one machine off the side of the road and it just torpedoed.”

That was Ms. Pac-Man, and it had definitely seen better days.

“It was completely faded and torn apart,” Brewer recalled.

After six months of elbow grease – and a few bottles of roach killer –his first piece of ‘80s lore was finished. Among the others that have joined it over the years is his pride and joy:  a 1981 Nintendo Donkey Kong machine that “was pretty beat when I got it.”

He restored it using original parts, from the marquee down to the joystick, and now, the teal-painted machine replicates its iconic ‘80s self.“It’s the epitome of a true, classic arcade machine,” said Brewer.

The oldest game in his collection is a 1970s Space Invaders system, which is older than he is.

The 33-year-old enjoyed playing arcade games as a boy, but never imagined owning one.

Brewer isn’t much concerned with the powers of entertainment these machines hold. His  arcade isn’t overflowing with kids with change to spare; rather it’s a retirement home for Galaga and Ms. Pac-Man.

He opens his Mount Rainier basement to the public each spring for the Gateway Arts District’s Open Studio Tour. Otherwise, the arcade operates privately for his friends and family, wife Stephanie and sons Sam, age 5, and Lucas, 2. Occasionally he’ll hold a private party for his friends, plug in the machines (all set to free play), crack open a few beers and play the night away.

While Brewer does enjoy this occasional reliving of his childhood, he admits that he’s more into refurbishing and restoring the games than playing them. He sees it as an art form, which makes his art-gallery debut this month especially meaningful.

“It’s awesome,” he said. “I’ve always been an artist in some shape or form, so I’m glad to see the public appreciate the art associated with the machines.”

Zero Waste of Time: How to reduce your food waste this holiday season

Streetcar Suburbs Publishing, 1 year ago 3 min read
From the Editor