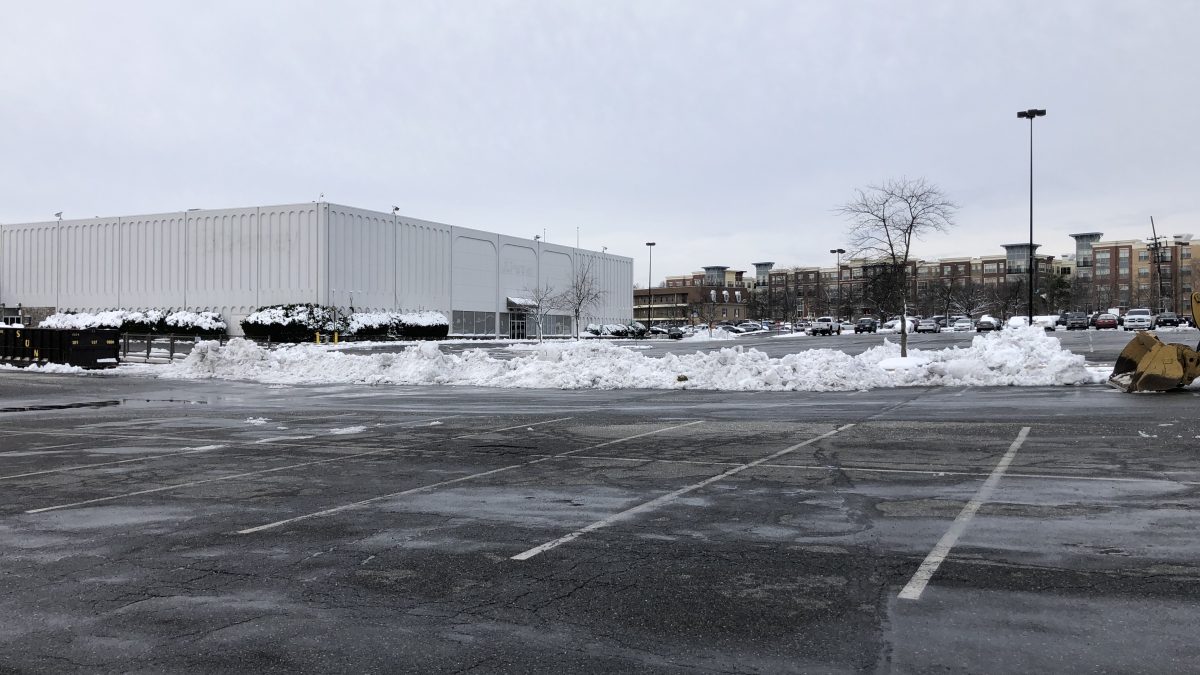 AvalonBay Communities, Inc. plans to construct a new building on the parking lot at the rear of the Mall at Prince George’s; the developer would also demolish a portion of the former JCPenney building. Photo credit: Heather Wright
Hyattsville

An underused parking lot near the Mall at Prince George’s may find a new use as apartments and retail space. Under a proposal presented to the Hyattsville City Council and Mayor Kevin Ward on Dec. 6, 2021, AvalonBay Communities, Inc. would build and operate a mixed-use building with 360 apartments and 1,000 square feet of ground-floor retail.

AvalonBay plans to construct the complex on the northwest parking lot at the rear of the mall, between the existing building and Toledo Road. The developer would also demolish a portion of the former JCPenney building. (JCPenney closed the Hyattsville store in 2020.) The remaining portion of the building would be retained for future retail. The apartment building would not have a direct connection to the mall, with a street separating the two buildings. The building design will allow for truck access from Toledo Road, through the center of the AvalonBay development, to underground storage units planned beneath the mall.

AvalonBay submitted an application to the county to subdivide roughly 5 acres from the mall’s 50-acre property, which is owned by Preit MPG, for the new development. The developers anticipate that the Prince George’s County Planning Board will hold a hearing about the preliminary plan of subdivision sometime this February or March. The developers will present additional details about the project to the Hyattsville Planning Committee and to the city council prior to filing a detailed site plan application with the county planning board.

Currently, surface parking is the dominant land use within the area around the mall and the Prince George’s Plaza Metro station. The long-term plan for the area, the 2016 Prince George’s Plaza Transit District Development Plan, envisions a walkable, transit-oriented community around the Metro station, including the area around the mall. The transit district plan calls for green development to replace “the bleak asphalt of expansive parking lots.”

The AvalonBay development would join two previously approved developments in replacing surface parking lots with housing near the Prince George’s Plaza Metro station. Perseus TDC plans to construct a building with 316 apartments and 2,052 feet of ground-floor retail space at 6400 America Boulevard, north of East-West Highway, between Belcrest Road and America Boulevard. The Dewey Property development will replace surface parking and previously undeveloped land with 682 apartments and 168 condos in several multifamily buildings. The Dewey Property, located north of Toledo Road, between Belcrest Road and Adelphi Road, will include retail space and also be the site of the county’s Nine Ponds stormwater management facility.

Hyattsville’s affordable housing action plan, its community sustainability plan and the county’s transit district plan all include goals for building and preserving affordable housing; despite this, none of the projects proposed in the Prince George’s Plaza Transit District, including the 6400 America Boulevard project, the Dewey Property and the Landy Property, will actually build affordable housing.

Like the other projects proposed for the transit district, AvalonBay plans to build only market-rate housing. When asked about including affordable apartments, Tom Haller, an attorney representing AvalonBay at the Dec. 6 presentation, clarified that the project is a market-rate project, not an affordable housing project. He later explained that, based on market research and the target market for the location of the new building, AvalonBay intends to design the building and apartments “targeted toward the upper 20s and 30s-something market, people that would be interested in living in a more urban retail environment within walking distance to the Metro station.”

The mayor and numerous city councilmembers encouraged the developers to explore ways to include affordable apartments in the project. When the developers explained that the proposed building would be only five stories tall, Councilmember Ben Simasek (Ward 3) pointed out that the transit district plan permitted buildings up to 16 stories on the site: “It does seem like the extra 11 stories that are permitted here could be an opportunity to create some additional space for affordable housing.”

The transit district plan calls for a network of complete and green streets in the area near the Metro station. Complete streets are designed to ensure that all people using the road, including pedestrians, cyclists, public transit riders and motorists, can travel safely. Green streets include environmental features to reduce the impacts of stormwater runoff.

The transit district plan recommends a number of upgrades for the portion of Toledo Road near the proposed AvalonBay development, including widening the street to provide two travel lanes for motor vehicles, on-road bike lanes, and curbside parking on both sides of the street. Wide, tree-lined sidewalks would also be installed. The plan also recommends siting the buildings close to the street.

Instead, AvalonBay proposes to bypass the recommendations for both bike lanes and all of the curbside parking. The developers propose to wait for the future development of the Belcrest Plaza Apartments, to the north of Toledo Road, and then possibly add one westbound bike lane and one curbside parking lane along the northern side of the street. The county will evaluate AvalonBay’s proposed changes to the transit district plan.

AvalonBay noted that their proposed changes to the transit district plan will go through further review. Ken Dunn of Soletz, an engineering firm involved in the project, stressed that they are working with the city and county to ensure that everyone is comfortable with the road design, and that the developers “want a safe bike and pedestrian experience for everybody involved.”

Residents Reflect: The Best and the Worst of It