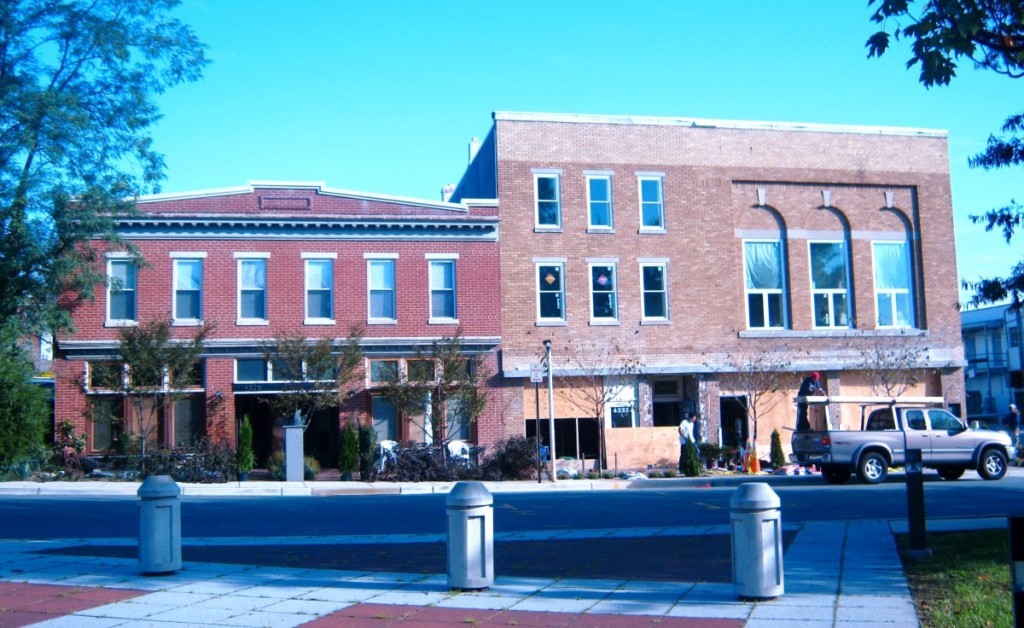 The city’s original municipal building and fire station, in the 4300 block of Farragut Street, is being repurposed as Firehouse Lofts. Photo courtesy Susie Currie (October 2011).
Business

BY SUSIE CURRIE — Most art openings do not include the opportunity to tour soon-to-open living spaces in historic buildings. But for architect Garth Rockcastle, the pairing is a natural one.

When Rockcastle moved here in 2004 – to become the dean of University of Maryland’s architecture school, a position he left last year – he already had plenty of experience in adaptive reuse, or using old buildings in new ways. A hallmark of the Gateway Arts District, it’s a key component of smart growth.
He’s done it again with a pair of 1912 buildings on Farragut Street that originally served as Hyattsville’s first municipal building and fire station. His vision was the same for each: commercial space on the first floor for “creative-culture enterprises” that are a natural fit for the district, with residential units on the upper floors. 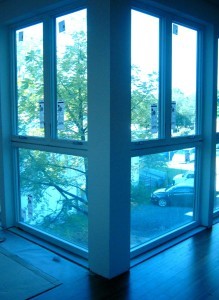 First, he tackled 4328 Farragut, which some locals still call the Machen Building after the prominent family that had offices there for decades. Now he lives there, above the East Coast  branch of the Meyer, Scherer & Rockcastle architecture firm he cofounded in Minneapolis in 1981.
The owner of the adjoining Edifice Studio, also an architect, moved into the second upstairs unit last year from Bethesda.
Rockcastle is passionate about the idea of mixing commercial and residential properties, calling the “modern segregation” of the two “unnatural.”
Acknowledging that the mix has not always been a harmonious one in Hyattsville, among other places, he insists that this is the ideal situation for an urban lifestyle. And, he added, Gateway Arts District zoning excludes any commercial use that adds high levels of noise and pollution to the neighborhood.
“Look at the success of 14th Street [in Washington, D.C.],” he said. “Or look at any major European city. They all do it this way.”
Taking that idea further, he designed his office to coexist with an art gallery. Desks are in the middle of the room instead of against the wall, leaving a path for visitors to view the exhibit.
On October 15, a reception from 6 to 8 p.m. will mark the opening of A\Work Gallery’s second show, “Intellectual Property,” by Silver Spring artist Courtney Miller Bellairs.
That’s also when the public can get a sneak peek at what Rockcastle has done next door, in the tan brick building across from the Prince George’s County Justice Center.
The first-floor commercial space is still very much a work in progress – his goal is to have it finished by late November – but upstairs, the seven condominiums of Firehouse Lofts are close to completion.
That night, some of them will be open for what Rockcastle calls a “construction preview.”
Four are in the old firehouse, including a two-story, three-bedroom unit with 19-foot ceilings and exposed brick.  “I try to leave traces of the history in each project [in historic buildings],” said Rockcastle.
A three-story addition along Church Alley holds three smaller units, some with two walls of windows.
All have access from both Farragut Street and Church Alley, where a new sidewalk has been installed. Six parking spots in a heated garage will be available to rent from the condo association.
As for parking for guests and clients, Rockcastle said he has asked that that the city allow street parking designated for “local commercial and residential use only,” to encourage Justice Center visitors to use its parking garage. Currently, “No Parking” signs line that block of Farragut.

The history of College Park’s incorporation

Nature Nearby: A little smelly start to spring

Sustainable Saturday Starts Off with a Buzz