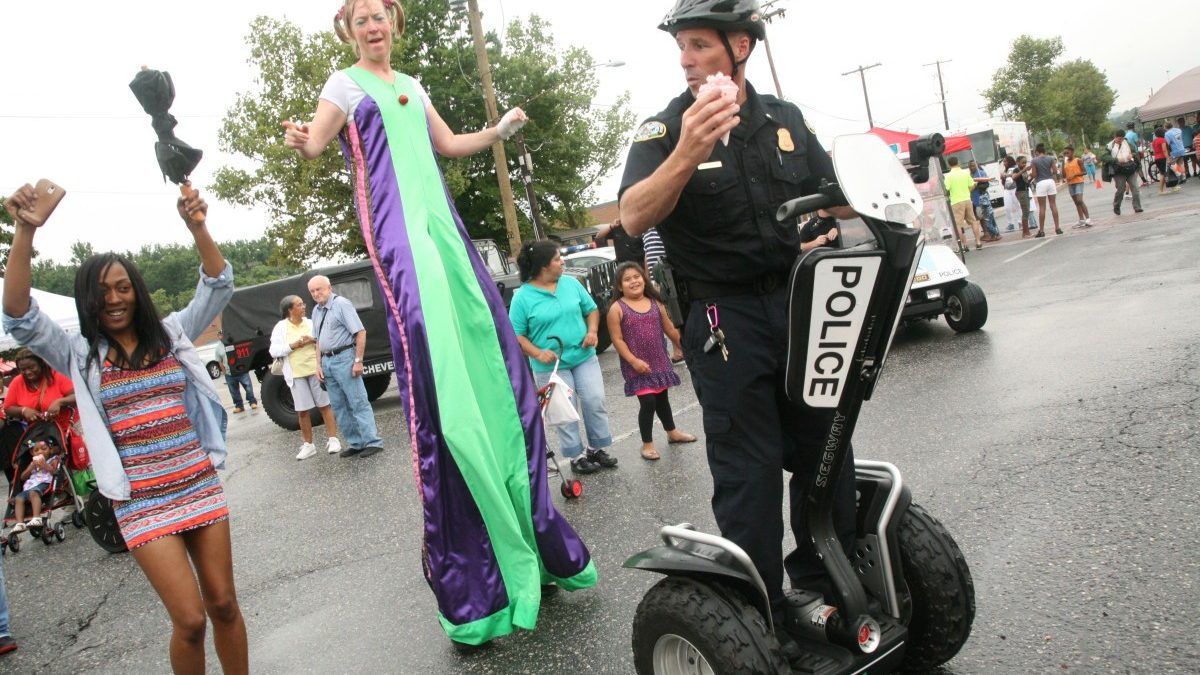 BY ROSANNA LANDIS WEAVER — Whatever doubts there may have been about moving National Night Out to Hamilton Street seem to have been swept away by the sounds of the Positive Vibrations Steel Drum Band playing, and by the sun finally appearing on an overcast day.

The mood of the 500-plus Hyattsville residents gathered for the August 6 event was jubilant.  There was cotton candy and popcorn. There were fruit-flavored snow cones, though the most popular flavor seemed to be the one called “Sky Blue.” There was a moon bounce and a slide and something called the Extreme Air Jumper that allowed bouncing children to perform astonishing acrobatic feats.

The annual National Night Out, held in thousands of communities on the first Tuesday evening in August, is designed to strengthen police-community ties.  What better way to do that than by putting the city’s chief of police in a dunk tank?  Chief Douglas Holland did several sessions in the tank, despite unseasonably cool temperatures in the low 70s, and got dunked countless times.

“It’s usually 105 degrees and 98 percent humidity when we do this event,” noted Community Services Director Abby Sandel. “That’s probably what he was expecting when he agreed to do this.”

Holland seemed to enjoy himself, taunting ball throwers such as Councilwoman Paula Perry. After she successfully dunked him, the chief came up for air and jibed, “If you were on target like that at council meetings we’d get a lot more done.”

Thirteen-year-old Daryl Page smiled broadly after he, too, downed Holland. “All the other times I saw a dunk tank they were on TV,” he noted, “I thought, ‘Here’s my time to shine.’ It felt great.”

The police also conducted a K9 unit demonstration, where the sight of a police dog “attacking” an officer in a big, puffy protective suit awed the audience.

Traditionally held in Magruder Park, the festival marked its debut in West Hyattsville this year. One reason for the move was to bring new people to the event, and Sandel believes that goal was met, noting that often at town events she sees the same people.  “I look around tonight and I see someone from every ward in the city.”

Juan Ogando, 21, has lived in Hyattsville his whole life, but had never been to the event before. “This is great,” he said. “I wish I’d brought my niece.”

It was the first National Night Out for Regina Perez as well.

“I have never seen so many people here on this street,” said Perez, who lives right around the corner from the National Night Out’s home base of Queens Chapel Town Center.

While she found the event to be amazing, and her niece could not take her eyes off the police horses, she had one minor complaint: “I’m looking for some food.”

The formal program ended with a concert by Hyattsville’s own Samba Trovão, a Brazilian group whose samba music includes reggae rhythms.  The police then led a large group in a crime-prevention walk through the neighborhood, fulfilling part of the mission of National Night Out to promote safer communities and send a message to criminals that neighborhoods are organized and fighting back against crime.