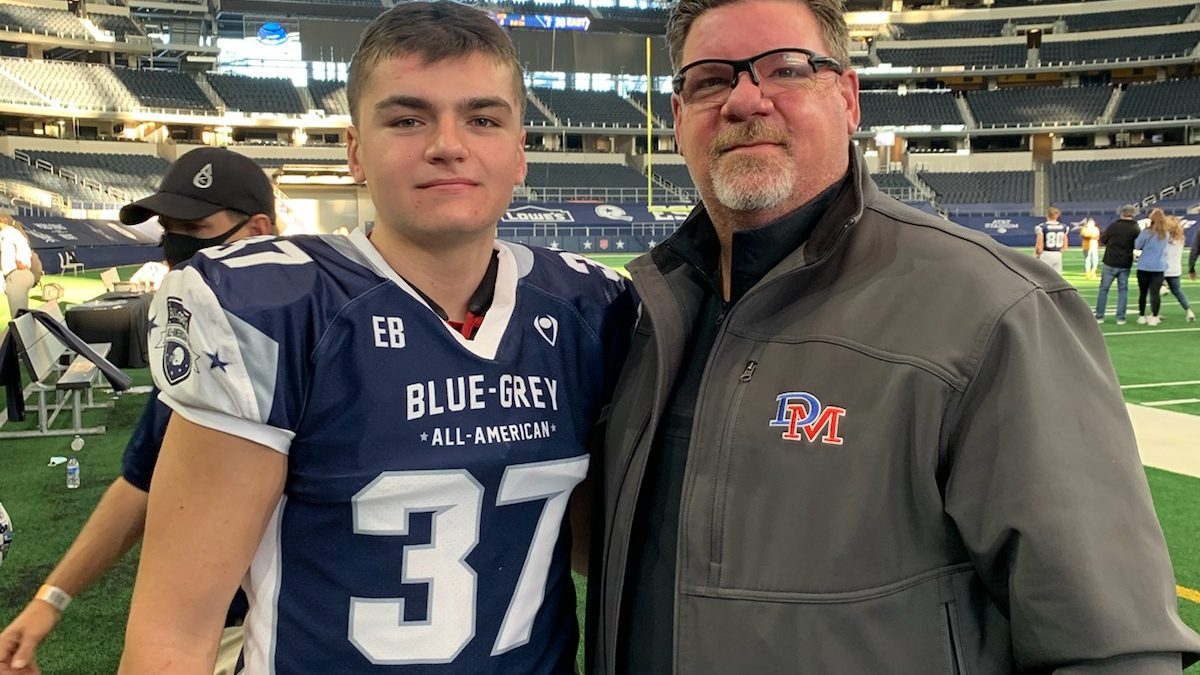 Ethan Gough, pictured with his father, Craig, was invited to the Arlington, Texas game as one of the top long snappers in the nation. Courtesy of Craig Gough
College Park

Ethan Gough first became interested in long snapping as a young child. He is now one of the best long snappers in the nation.

Gough, a senior at DeMatha Catholic High School, was invited to the Blue-Grey All-American Bowl Dec. 14. That same week, he committed to play football at the University of Maryland.

“It’s my hometown team,” said Gough, who lives in Owings, Maryland, in Calvert County. “Once I knew Maryland was interested in me, there’s no question that’s where I wanted to go.”

“Ethan works really hard and has done a tremendous job to perfect his craft,” DeMatha Coach Bill McGregor said. “He has a great future at a skill that’s difficult to master.”

Gough also visited Boston College and Virginia Tech. He said the Terps first became interested in him in late 2019, after he spoke with Brooks. Maryland will have senior long snapper James Rosenberry next season. In 2022, if Gough emerges as the Terrapins’ No. 1 long snapper, he would hope to get a scholarship.

Gough helped the East team win the Blue-Grey All-American Bowl in Arlington, Texas, 36-17. Craig, who played on McGregor’s 1984 undefeated DeMatha team, accompanied him to the game at AT&T Stadium, home of the Dallas Cowboys.

“I had the opportunity to snap a lot, and I got in on a tackle,” Gough said. “It was a great experience. The stadium was awesome.”

In 2017, Gough started at center for the Stags’ freshman team’s and was the backup long snapper on varsity. He also played lacrosse. He has been DeMatha’s starting long snapper for the past two seasons. His senior year, if played, will be in February and March.

“I’m preparing every day for the season and want to be ready for college,” he said. “But I’m really hoping that my teammates and I get to have our senior season and can go out with a bang.”

McGregor complimented Gough for his work with sophomore long snapper Noah Vitko. “Noah has drastically improved his snaps,” he said. “Now we’re going to be set when Ethan graduates. I’m really thankful for that.”

The long snapper plays a critical role on every football team. It’s his job to get the ball to the punter as quickly as possible to a spot where he doesn’t have to alter his kicking motion. On extra points and field goals, the ball has to be placed precisely in the holder’s hands, so he can set it down for the kicker with the laces facing forward.

After hiking the ball on a punt, Gough gets involved in kick coverage: “I love running down the field and trying to hit somebody.”

Gough’s initial interest in long snapping piqued when he was 8. His team, the Dunkirk Warriors, was getting ready to play in a national championship game in Central Florida. His role model was his brother, Ryan, then the Stags’ center and long snapper.

“It was the morning of the championship, when he showed me how to do it,” said Gough, whose squad won the game in double overtime. “Ever since then, I did it for my youth teams. Once it came to eighth grade, I really wanted to make varsity as a freshman. I tried the best I could, watched YouTube videos, and I was able to make the team.”

The 6-foot-1, 215-pound Gough continued honing his craft by attending several camps around the country. In July 2019, he went to a Kohl’s Long Snapping Camp in Milwaukee. Out of 76 underclassmen, Gough won the event.

Making it all the more special was that Nick Sundberg, the Washington Football Team’s long snapper, presented the award. Sundberg is Gough’s favorite player.

“That was a great experience for me,” he said.

Gough carries a 3.86 GPA and is a member of the National Honor Society. “He’s a great young man and a great leader,” McGregor said.

One of Gough’s major goals is to one day play in the NFL.

“I have to work hard in the classroom, keep working out, lifting, running and refining my snapping technique,” he said. “I just have to keep working hard.”

Stories of the enslaved echo at Riversdale