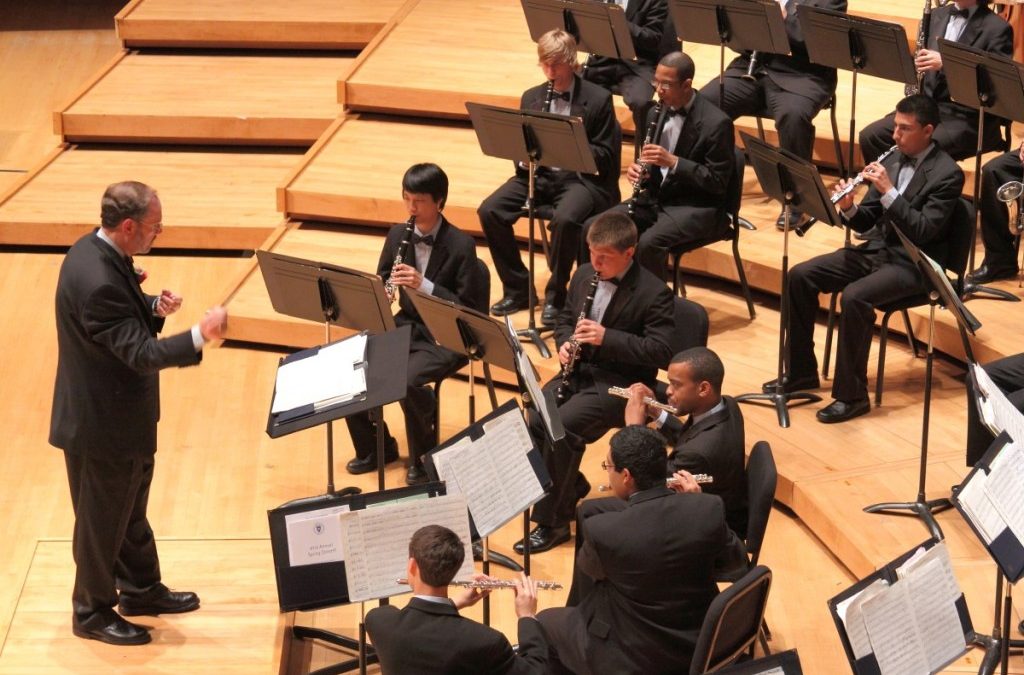 BY PAULA MINAERT — On May 12, John Mitchell, Director of Bands at DeMatha Catholic High School, conducted his final DeMatha concert, a sold-out show at the University of Maryland’s Clarice Smith Performing Arts Center. The evening included not only music by the school’s top concert band, but also tributes from both faculty and alumni. It was a momentous occasion because Mitchell was retiring after 40 years at the school.
In 1970, Mitchell came to teach music at DeMatha, known then mainly for its sports programs, especially its basketball team. He proceeded to establish a music program that is now equally acclaimed. He started with a band that had 19 students; today the whole music program has 400 students in 15 different groups.
Under Mitchell’s leadership, the various bands, orchestras and ensembles have garnered so many awards and trophies that the school has run out of room for them.
But Mitchell says that his favorite part of the job was interacting with the students, both in class and outside of class. He said, “You can do a lot of teaching outside of class.”
He added that the school gets a wide range of students, of different backgrounds and skills, and he enjoyed watching them learn and grow.
Interviews with some of his students show that they enjoyed learning from him as well. When they talked about Mitchell, the word “inspiring” came up often. Rising senior Michael Sprunk, who plays flute and piano, said that even though music was always part of his life growing up, it was just something he was required to do. He didn’t really understand it, he says, until he came to DeMatha.
“I don’t know how it happened. Mr. Mitchell just inspired me to want to play. Suddenly everything started to make sense to me and I started to enjoy playing. He made me what I am today in music.”
Sprunk doesn’t plan to go into music as a career but said he will never stop playing and music will always be a part of his life.
Another student, Mario Perez, is going to the University of Maryland Baltimore County this fall. He plans to major in music and maybe to teach music eventually, and attributes this desire to Mitchell.
“Mr. Mitchell changed my life,” Perez said simply. “When I came to DeMatha, I had no previous experience in music. But I fell in love with it. And he was always pushing me to do better.”
Perez will still be able to learn from Mitchell, because he plans to join the wind ensemble at Catholic University that Mitchell directs on Monday nights.
Spencer Cooksey, a rising senior, will major in marketing or management in college but said he’ll always make room for music in his life. He described Mitchell as “the greatest band director anyone could ever ask for. He has this presence about him, a real dedication to what he does. He’s truly inspiring.”
Cooksey added, “Mr. Mitchell is known among his students for his despair. If you’re not playing up to his standards, he just looks at you for 30 seconds without saying a word. Not angry, just a blank stare. It makes you feel, ‘Wow, I gotta practice and get this together.’”
He said music has grown on him since coming to DeMatha. He started with the saxophone and is now branching out to guitar and piano.
Buddy Paolucci is graduating this year and will probably study either business or engineering in college – but he too will keep playing music in some way. He plays the euphonium, which is a brass instrument with a mellow sound and valves instead of slides.
He didn’t take music seriously at first, he said, but was inspired by Mitchell to work hard at it. “He really led by example and gave 100 percent – he only missed one band rehearsal in all four years I was there. He taught us hard work and knew his craft well. Music is great. It helps you expand your mind and be part of something greater than you and me. It brings out your best. It lets you use the whole brain, use it to the fullest. It helps you work as a team so it helps in everyday life and your career.”
Matt Bickell, who graduated from DeMatha in 1995, now teaches there: he’s in charge of three orchestra classes and a band class. He said Mitchell is the reason he is there.
“I was dragged to music kicking and screaming. My parents valued music, but I came to DeMatha hoping to play [college] basketball for Duke. But I was cut from the freshman team. Music was always in me but I wasn’t comfortable in my own skin. I saw Mr. Mitchell’s passion for music and was able to find my own.”
Bickell went to The Eastman School of Music and majored in trumpet performance and music education, then played professionally for 10 years. But in his mind, he said, he always wanted to return to DeMatha and give something back.
Mitchell will be gone from the classroom, but it’s clear his legacy – his influence – will live on.

Postcards from the Past: Hyattsville's Independence Day through the years