With winds estimated between 80-90 mph by the National Weather Service, the College Park storm of July 12 was no typical thunderstorm that local residents are accustomed to seeing.

The Damage Caused by the College Park Storm

The damage was more than College Park residents are accustomed to experiencing, with more power outages and many fallen trees across the area.

Pepco, the local energy provider, said in a statement that the storm impacted about 47,000 Pepco customers. Their release said Pepco had more than 500 workers helping restore power in the area, resulting in power restoration during the days following the storm.

The University of Maryland also dealt with power issues. The school canceled both online and in-person classes on July 13, the day after the storm.

The Origins of the College Park Storm

“We had a bow echo,” Bob Kuligowski, a meteorologist from College Park, said. When that happens, wind blows from behind the storm, causing the storm to form a bowed out shape. Sometimes that wind falls beneath the storm, which can bring violent winds at ground level, Kuligowski explained. 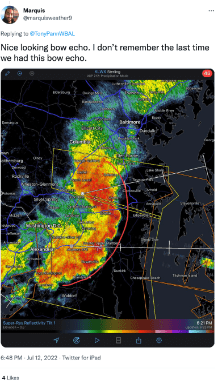 In this tweet from @marquisweather9, you can see the bow echo in the local radar. Notice how the storm forms an arch, with the middle protruding toward the east.

Kuligowski continued to explain that as the air moves downward from behind the bow echo, it can turn into very strong straight winds. That is what caused the strong winds, which the National Weather Service reported were approximately 80-90 mph. While the storm was not a tornado, the NWS said in its July 13 storm survey that “yesterday evening’s estimated winds in College Park are equivalent to that of a low-end EF1 tornado.”

When asked if it is possible to predict these storms, Kuligowski explained that meteorologists can recognize conditions that make a storm likely, but it is difficult to predict exactly when and where these storms will hit at their worst.

Kuligowski said the storm started near Romney, WV, and made its way across the D.C. area. He continued, “there were actually three different bow echos that came through [that day]. One came through the Maryland Panhandle in the morning and hit Baltimore…  another passed south more between Fredericksburg and Southern Maryland… the middle one (College Park), was the one that really had the impact.”

These were bigger bow echoes than Kuligowski is used to seeing, though he says there are many in the region any given summer. The combination of warm air, lots of moisture near the ground, and an incoming cold front showed that the conditions for a severe storm were met. Knowing that the front of the storm’s arch will go over College Park and send such strong winds is very difficult to predict.

“I had not seen something that textbook and that strong in a long time,” Kuligowski said. While weather in this area typically changes direction or breaks apart, this storm stuck together and landed a direct blow.

On the front burner at the Laurel Museum

From the Editor: Do you trust what you read in the paper