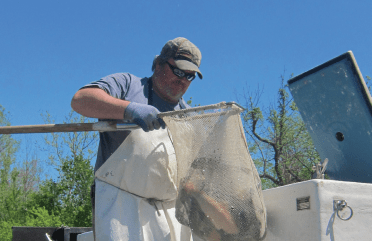 The fisherman is deep in reverie on a cool spring morning.  Sunlight dapples on a fast-moving stream, tripping over small rapids and falls.  Boughs of pale-green leaves form a canopy over the water.  A profusion of river rocks and pebbles glimmer in the clear water, framing deeper holes that beckon to the angler.

Then a piscine form rises from the depths.  The fish, golden as the sun, is transfixed by an insect dancing on a branch just above the surface. The dazzling fish edges nearer to its prey on the branch above … closer, still closer …

“Dad, I need help with this snag!”

The spell is broken, and the dancing insect is revealed to be a Panther Martin #4 spinnerbait, cast by the fisherman’s 8-year-old son and now hooked on the overhanging branch. This is not a wilderness adventure, but a May morning on Hyattsville’s Northwest Branch of the Anacostia River.  And the fish, now spooked by the commotion, is a golden rainbow trout, first created by a breeding program in West Virginia and since stocked widely in mid-Atlantic states.

Unbeknownst to most Hyattsvillagers, a mile-long stretch of the Northwest Branch, between East-West Highway to Hyattsville’s northern border near University Boulevard, is a Maryland designated “put-and-take” trout stream.  The Maryland Department of Natural Resources stocks the stream three times every spring with thousands of rainbow trout — mostly 10 to 12 inch fish, but also some “trophies” of 18 inches or more.  The fish remain in the creek until they are caught or they succumb to summer’s heat.  Because they are raised in clean fish hatcheries, they are safe to eat even though they temporarily reside in the polluted Anacostia watershed.

The fisherman discovered the stocking program by accident almost a decade ago, while fishing a man-made rapids in a section of the stream east of 38th Avenue.  He cast a spinner into the roiling water, and was surprised when a wriggling rainbow trout came back on the end of the hook.  Since that time, he and his children have caught the occasional trout that makes it downstream as far as the fish ladder at Rhode Island Avenue.

This year the fisherman found out the last 2013 Hyattsville stocking, and showed up at the appointed time at the location near University Hills Park.  As he waited for the DNR fish truck to arrive, he learned that the event wasn’t as secret as he supposed.  A veritable convoy of vehicles began to arrive, each carrying a man old enough to be his father.  As it happens, this was the re-enactment of an annual ritual for these veteran anglers, most of whom live in other counties and meet together only in the spring to help DNR staff put the trout in the stream — and then to fish them back out again afterwards.

“Would it not have been more efficient to just transfer the fish to their freezers instead of the river?” asked the fisherman’s cynical brother.  He doesn’t understand the thrill of the chase.

The fisherman is introduced to the dean of the Northwest Branch trout patrol, Charley Koiner, age 92. Koiner describes himself as “the last farmer in Silver Spring,” and when he is not chasing trout, he is farming his 1.5 acre spread in downtown Silver Spring or selling his produce at the Silver Spring Farmers Market. He says that the day before, he transplanted 1,000 lettuce sprouts — and offers the fisherman a free head if he visits at the end of May.

DNR fisheries biologist Mark Staley supervises the fish-transfer operation.  Fourteen-hundred hatchery-raised fish arrive in the hold of a tank truck, then netfuls of thrashing, splashing rainbow trout are dumped into water buckets and hauled off by the volunteers to their favorite fishing holes in the stream.

“I see a lot of the same guys every year,” said Staley.  “They volunteer with the stocking, and then fish.”

Staley confides that the best methods for catching the trout include floating trout pellets downstream on a small hook and casting lures such as Roostertails and other spinners.  Some of the assembled anglers swear by corn kernels as bait. They start early in the morning, when light is low, and look for the deep holes that harbor fish.

The truck moves on to the next stocking site, north of University Boulevard. The fisherman is delighted to have a chance to participate in the bucket brigade.  He walks his cargo to a pool below a riffle near a trail bridge. Hiking up his jeans, he walks out to the middle of the rill and deposits a couple dozen frisky fish into the fast-moving water. They immediately spread out through the pool, their multi-colored forms creating a tableau worthy of an Impressionist painting.

The next morning, after having purchased his Maryland 2013 fishing license and Trout Stamp online, the fisherman continues his research into the N.W. Branch stocking program, with the assistance of his son, George. After helping extricate his son’s snag, he watches the boy cast the spinnerbait back into the pool and begin his retrieve. The golden fish swims up, and takes a small nibble. Not enough to set the hook.

They work the stream for almost an hour, but the only thing they have to show for it is the thrill of seeing a rainbow put on a brief aerial display after being hooked, before throwing off its snare during its leap above the water.

Later in the day, the fisherman returns to  the stream and  notices that yesterday’s volunteers are today’s fishermen. He meets several as he moves downstream through University Hills, and also meets quite a number of yesterday’s fish.  The golden rainbows are the easiest to spot, and he spies at least a dozen in a stretch of a hundred yards.  Perhaps aware that they are bred to be living beacons to fishermen, they also have learned to compensate by being extremely finicky in their eating habits.  None so much as turns a head at his lure.

As he stares, bewitched, at a pair of large golden trout in the middle of a pool, he hears a rustle from the other side, and sees an octogenarian angler teetering on the steep bank, trying to make his way down to the edge of the stream.  The fisherman wonders:  Is this a glimpse into his own future?  Will he be here again, 30 springs from now, stumbling down a stream bank in north Hyattsville for another chance at a rainbow trout?

For a moment, the fisherman considers wading the stream to assist the elderly sportsman, but then regains his senses: That would spook the trout.

The man eventually finds a safe perch near the water and resumes his quest for the golden treasure. So, together, they fish on, lures against the current, borne back ceaselessly after each cast.

Nature Nearby: The music of the night