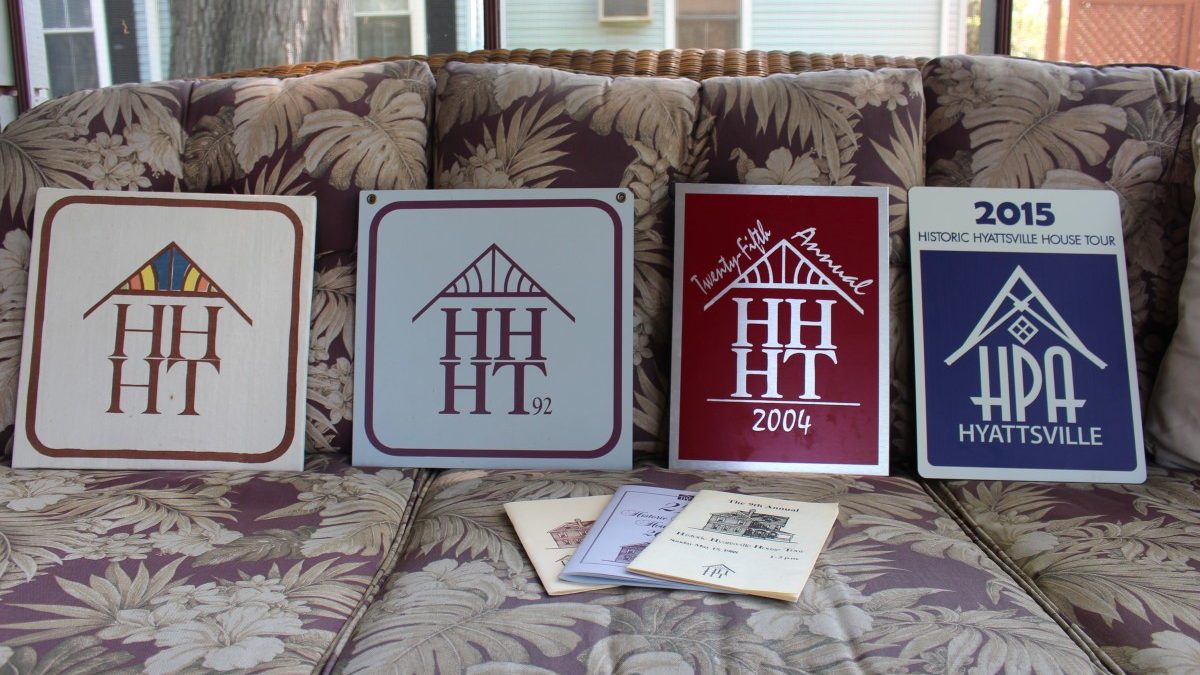 BY CAROLINE SELLE — Updated at 10:04 a.m.  Before Mary Kay and Joe Giunta agreed to let their Farragut Street home be part of the first Historic Hyattsville House Tour (HHHT) in 1980, Mary Kay said she told the organizers, “You have to call us a ‘before’ house.”

This year will be the tour’s 36th anniversary and the Giuntas’ sixth time participating in the self-guided event presented by the Hyattsville Preservation Association (HPA).  The 2015 tour visits ten structures, including Ash Hill locally known as Hitching Post Hill.

EDITOR’S NOTE: This article originally said the Marché Mansion and the Prince George’s Bank and Trust were on the 2015 tour, but they are not.

When the Giuntas purchased their 19th century home in 1977, “it was a wreck,” Mary Kay said. Water damage had disfigured walls and ceilings; the kitchen was all in shades of green; and the second floor bathroom was a garish purple and red.

“We called it Casper,” she said, because the outside  as white as the friendly ghost.

Joe did much of the remodeling work himself. An architect, he also designed the first logo for the tour. There was no year on it, Mary Kay said, “because we weren’t sure there would be another.”

They’ve been participating ever since.

Today, the home looks nothing like the ‘before’ photos. Doorways that once connected upstairs bedrooms to each other have been turned into closets, the formerly green kitchen is now painted blue, and what was once a purple and red bathroom is now painted and tiled in much more modern tones.

The tour will also venture into University Hills for the first time so that attendees can visit the tour’s newest addition, the historic Ash Hill dwelling, via a designated bus.

“Ash Hill has been known to us for years,” said Gloria Felix-Thompson, the president of the HPA Board of Directors. “We’ve always wanted to have Ash Hill on the tour, but first we had to figure out logistics.” The two-story brick home, also known as Hitching Post Hill, was visited by Presidents Grover Cleveland and Ulysses S. Grant.

A short drive through neighborhood roads and onto 42nd street will bring attendees to another historic structure, the home of Jeff and Marsha Moulton. It’s “one of the 19 buildings in the city on the Prince George’s County Designated Historic Sites,” said Felix-Thompson.

When owner Jeff Moulton first saw the stand alone structure to the left of the home, “I said look at this space; this is great,” he said. Moulton transformed that space from a  garage and doctor’s office into an artist’s studio. Today, exposed beams line the roof, and a huge painting of a palm tree — at least eight feet tall — is propped against one wall.

It’s helpful, he said, “to have a place like this that’s not connected to the house.” Paint odors stay out of the couple’s living space, and as a bonus the studio is also a safe haven for the lounging cat, a stray that the Moultons adopted.

The home itself was built in 1912. “It’s supposed to be Victorian, but it’s more of a blue collar Victorian,” Jeff said. “We think that the porch was added on.”

It’s been challenging to own a historic structure: the new shingles on the front of the house “had to be hand milled in British Columbia and then trucked here,” Jeff said.

“As you go through the house, you’ll probably see a lot of rabbits,” Jeff said. Marsha’s maiden name was Bunting, and “Bunny” her nickname. In addition to rabbits, the home is decorated with the Moulton’s original artwork, pieces by their friends, and other art from Marsha’s travels, particularly throughout Africa and the Middle East.

But neither the front of the home nor the studio hint at the surprise awaiting visitors who walk out onto the home’s back porch. Water from the studio’s downspouts is channelled into a natural pond, filled with fish and surrounded by native plants. The water garden is one of several gardens dispersed through the Moultons’ backyard.

The houses on this year’s tour may be old, but they’re all different.

“It’s not so much that the houses are grand,” Jeff said. “Some of my favorite houses on the tours are the smaller ones where you can really see the personalities and people’s lifestyles.”

The 36th Annual Historic Hyattsville House Tour will take place on Sunday, May 17 from 1 to 5 p.m. Tickets are $10 in advance and $15 at the door. Visit www.preservehyattsville.org/tours for more information.

Metro to switch from ZipCar to Enterprise CarShare June 1

Trader Joe’s to open this fall