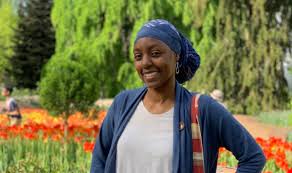 By HEATHER WRIGHT — On Jan. 14, the City of Hyattsville selected Saarah Abdul-Rauf as its 2019 Employee of the Year. Abdul-Rauf has worked for the city since fall 2015 and is currently the supervisor of Youth Programs. In an interview, Abdul-Rauf described how she saw the award as an honor for the Youth Programs staff as a whole.

“It’s not just Saarah, Employee of the Year,” said Abdul-Rauf. “I feel like it’s Youth Programs. We have accomplished a lot in the last year.” Youth Programs staff coordinate and oversee the Creative Minds Parent and Child Program, Camp Magruder and the Teen Center.

The Seth Holton Award is named in honor of Hyattsville’s first city clerk and is given out “for exemplary service to the Hyattsville community,” according to a city press release.

Cheri Everhart, Abdul Rauf’s supervisor and the city’s manager of Recreation, Programs and Events, nominated Abdul-Rauf and noted, “Saarah’s performance this year was outstanding. She developed and led a successful team of youth coordinators to expand City programming. Her work has allowed more children and teens to participate in [the] City’s camps and Teen Center.”

Under Abdul-Rauf’s supervision, the Teen Center after-school program expanded from three to five days a week and now includes a tutoring and mentoring program. Abdul-Rauf, whose first “real job” was as a junior counselor at a Girl Scout camp, expanded Camp Magruder’s programming to include days that schools are closed and developed a Camp Coach in Training program. Abdul-Rauf also coordinated the successful integration of deaf students into Camp Magruder “by hiring ASL-fluent [American Sign Language-fluent] seasonal staff and providing contracted translators for all Camp staff training, parent information meetings and field trips,” according to Everhart.

Abdul-Rauf was born in Silver Spring and spent her early years there before moving to Chapel Hill, N.C. She graduated from William Peace University (formerly known as Peace College) with a bachelor’s in anthropology. Prior to coming to Hyattsville, Abdul-Rauf worked with AmeriCorps VISTA and as a program director for Rockville’s after-school program for middle school students.

Former Community Services Director Jake Rollow said in an email, “Saarah is a wonderful person, a fantastic colleague, and a true gift to the Hyattsville community. Her ability to lead young people and children — in both work and play — is exceptional.”

Youth Services Coordinator Veronica Rivera-Negrón, who works under Abdul-Rauf, concurred. “This is such a well-deserved award! Saarah has advocated for the increase in resources to ensure the City of Hyattsville delivers high quality programs for youth ages 1-18, and it’s exciting to see that they recognize her work,” noted Rivera-Negrón in an email.

Abdul-Rauf credited two of her high school mentors, Lorie Clark and Graig Meyer, as having a very strong influence on her professionally. Clark and Meyer were both part of the Blue Ribbon Mentor-Advocate program, a Chapel Hill-Carrboro City Schools program designed to support the achievement of students of color.

Late in her high school career, Abdul-Rauf joined the Blue Ribbon Youth Leadership Institute (YLI), through which she engaged in community service projects that taught her “what it meant to be a good leader, what it meant to be a servant leader.” She continued, “To this day, I still apply a lot of those things to the work that I do, especially with the teens.”

Abdul-Rauf described how her mentors and YLI valued and emphasized reflection and instilled that value in her: “So whenever we do a project with our teens, I try to make sure that we’re asking them questions to dig a little bit deeper and [to understand] why we did this [project] … what’s the larger picture here — especially when we do service projects.” She also credited Clark and Meyer for the team-building activities she does with her staff and students. “They were definitely a huge influence,” Abdul-Rauf concluded.

Upon learning she was the City of Hyattsville’s 2019 Employee of the Year, Abdul-Rauf said, “I was completely shocked.” She thought she was in “huge trouble” when City Administrator Tracey Douglas asked her to into Douglas’s office, with Everhart following along behind.

Abdul-Rauf described the scene: “I walked into Tracey’s office and Vivian Snellman was sitting there — she’s our Human Resources officer — and I thought, ‘I am getting the pink slip.’”

Instead of that pink slip, Abdul-Rauf will receive the Employee of the Year award during the Feb. 3 city council meeting.